Log 25.4.22
a couple days ago i slept over at a friend's house, theoretically for a study day but we realised pretty quickly it wasn't going to work out like that. instead we watched what we do in the shadows together! both the original movie and the first two seasons of the show. i'd seen the full show but not the movie, and they'd seen the movie but not the show, so it worked out nicely :3 i'd honestly forgotten how much i used to love wwdits - it's SO good, i highly recommend it. cw for a lot of sexual humour though lmao.

it seems that a lot of people have been on a taika waititi kick lately, myself and aforementioned friend included. i didn't realise that he actually plays viago, the main character of the wwdits movie! if you don't want to dedicate all that time to a show, i recommend you at least watch the movie. it really captures the feeling of "some guys 𝕗ucking around with a camera" and has a surprisingly wholesome ending!

apart from wwdits, though, i haven't read or watched anything. i mean, ive been relistening to some old tma episodes to go to sleep, but since i'm asleep for most of it... kind of feels like it doesn't count. school goes back soon as well which means i'll have even less time rip. oh well, it is what it is.

Log 16.4.22
hey folks! just dropping in to note that i rewatched OFMD in its entirely (and started work on a fanpage), and reread The Disasters! The Disasters (M.K. England, 2018) is a book abt a small group of people who are trying to save the galaxy. kind of the standard scifi setup. i HIGHLY recommend it, though - it's very readable, not too long, with wonderful characters. it's not a book with a whole heap of depth, mind you - it sets out to be a Fun Sci-Fi Adventure and it accomplishes that well. i also rlly like how diverse the cast is - all of the main characters are some combination of queer (with a trans character!!! they're not just cis gays!!!!), neurodivergent, or POC. two of the characters (incl the protagonist) are also muslim! it didn't feel like forced diversity, either, which was incredibly refreshing. just people being people :)

i actually got to meet M.K today!!!! they joined my book club via zoom, which was VERY exciting for me. the disasters has been one of my favourite books for a few years now! it was so cool to meet them, and they actually fit very well into our little book club group which was lovely!


Log 11.4.22
hello!! it's been a little while since i've updated here. (a little over a week, you may notice.) it's been exam week at school, so less time to enjoy things and even less time to write about them. but holidays now!! and i get to talk about my New Favourite Subject: the gay pirate show <333

the show i'm talking about is called "Our Flag Means Death", by David Jenkins and Taika Waititi. if you like:
- pirates
- romcoms
- pirate romcoms
- taika waititi content
- queer content
- taika waititi starring alongside rhys darby in queer pirate romcoms
- trans characters played by trans actors
- trans characters played by trans actors being badass
- characters with childhood trauma
- clearly neurodivergent characters
- clearly trans and neurodivergent characters outwitting the british
- interesting costume design
- shows that you can read rlly far into
- shows you don't have to read rlly far into if you don't want to
- shows that make autistic people (me) cry facedown on the floor for half an hour
- did i mention that taika plays blackbeard
- queer poc disabled blackbeard played by taika waititi
- genuinely what more could you possibly ask for guys
- pirates who are incompetent
- pirates who are scarily competent but incompetent when it's comedic
- actors who don't suffer from hollywood same face syndrome
- shows with an actually genuinely diverse cast of people
... then you'll enjoy OFMD!
i feel like i lost my train of thought there a little.

genuinely though. this show has overtaken the magnus archives (14+ month long special interest), the x files, AND this website in my brain. it's a celebration of queer masculinity in many different forms. you know how sometimes, especially in fandom spaces, the difference between "media about x" and "media that has x" isn't really acknowledged? OFMD is one hundred percent, completely, unapologetically a show about being queer. i've never felt so completely recognised and understood. from jim, a nonbinary character played by a nonbinary actor, to stede, a man who's lived his entire life being bullied and mocked for his visible differences and inability to adhere to typical social gender roles, to ed, a man who's built up the perfect masculine persona of blackbeard in order to get anyone to take him seriously. this is not even mentioning lucius, oluwande, frenchie, or the rest of the crew.

it's available on binge or hbo max if you already have those platforms, and on a whole bunch of other sites if you don't. it's only ten episodes long, with one season so far - definitely worth your time. please. i'm begging you. watch this show. i'm sure you've heard about it already but juuuuust on the off chance you haven't watched it. it's s o f u c k i n g g o o d.

other things i've looked at during this time:
Girls Against God, by Jenny Hval. queer feminist surrealist norweigan occult horror. this book has completely indented itself upon my psyche. holy shiiiiiiit. it is fairly dark in parts, and also generally has some nsfw themes if that's not your thing, but HIGHLY recommended. no other literature has described the experience of growing up queer in a sheltered conservative christian home as accurately. and the sections about what it calls the "cosmic internet"? IMPECCABLE. i borrowed this copy from a friend but i'm ordering my own copy asap so i can attack it with a highlighter and pencil. sososososo important to me.
The Magnus Archives, by Jonathan Sims and Alexander J Newall. obviously i've loved tma for a long time now but i've been relistening each night to fall asleep, and i'd forgotten how extraordinarily wonderful and spooky Jonny's writing and acting is. if you've never listened to tma i encourage you to check it out! (i also encourage you to avoid the fandom as long as you can, but hey, i'm not your parent.)
Cloud Gardens, by Noio. a beautiful and restful game. you get to turn dystopian scenes into plant covered gardens. what's not to love? 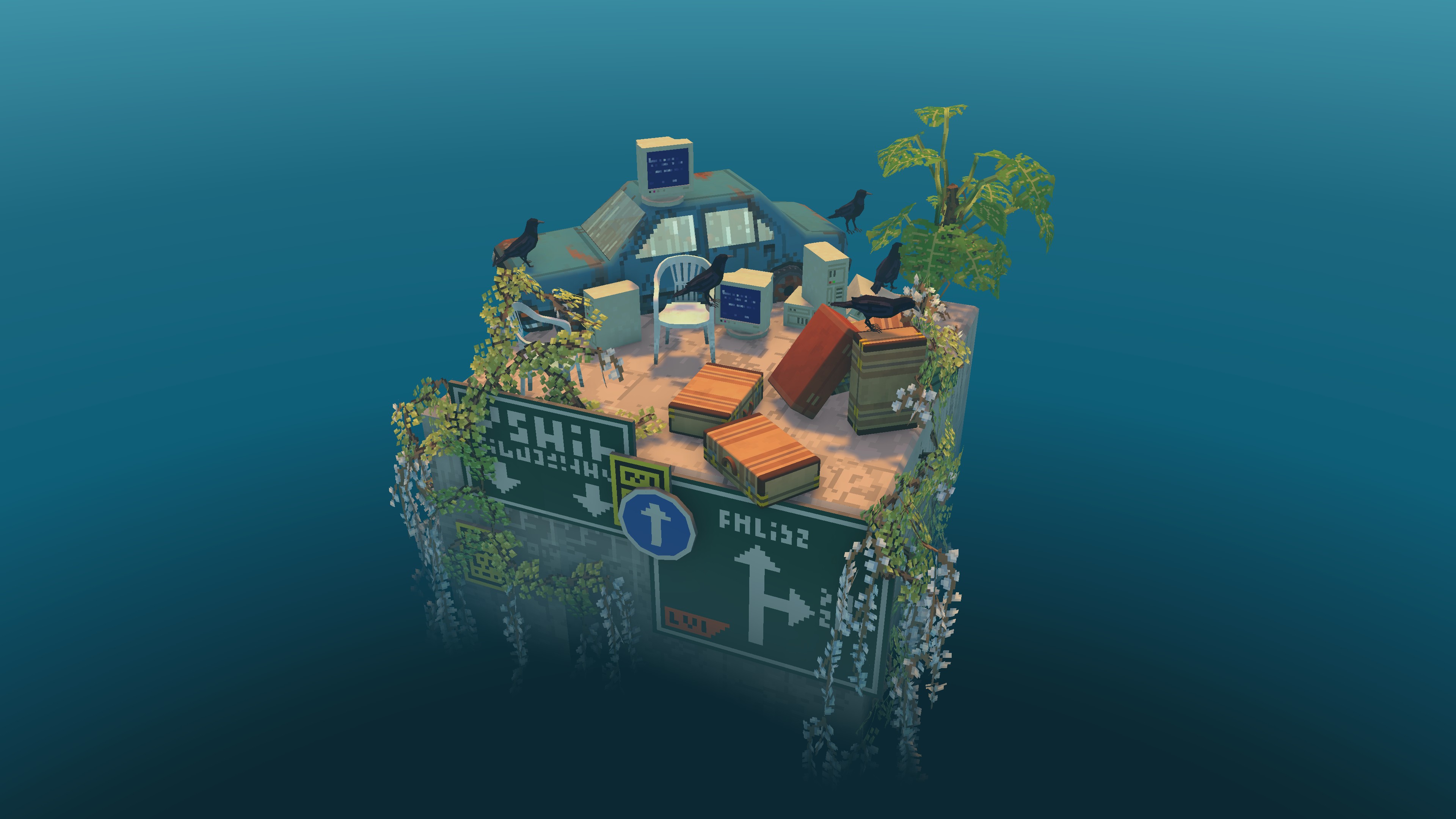 The Silt Verses, by Eskew Productions. i've only really properly listened to the first episode, but I can see why a lot of tma fans like it. it's like if someone took all the messy, dark, blurred sections of tma, and expanded them into something fascinatingly new. so far it seems a bit darker than tma in tone, which i'm really enjoying. some of the mixing levels though are a little frustrating, since i startle easily and can't have it loud, but have too many audio processing problems to have it quiet - but then again i'm only on the first episode, it could very well improve as i go along.
Wooden Overcoats, by Andy Goddard and John Wakefield. apparently there's a whole new season out and I didn't notice! i was listening to it today and work and it is, as always, delightful. if you haven't heard it, it's a morbid comedy podcast about two clearly autistic siblings - twins, in fact - who run a funeral home... except, they aren't very good at it. (it also has several queer characters, which is a lovely bonus!) i binged the whole thing a while ago, so i'm excited to listen through their fourth and final season.
The Penguin Henry Lawson Short Stories, a collection of Henry Lawson's works. this one was for school, but i'm mentioning it here simply to request that you do not read it. it's a good insight into a veeeeery specific perspective of a very specific time period - which is to say, it's horribly racist and misogynistic. it was deeply frustrating to read through and then write an essay on, but i coped ✌ (mostly).
The X-Files, by Chris Carter. I finished s4 and am a few episodes into s5!!! and let me tell you, i LOST IT when scully said mulder died. i mean, i knew logically there were still like six seasons to go? but i was still DEEPLY upset. and then the cigarette smoking man died just two episodes later!! like!!! well f uCK!!
anyways, whoops, this was a long update. i guess i read/watched/listened to more than i thought i did. talk to you guys later :3